Cerebral Palsy is a group of neurological disorders that affects muscle coordination and body movement permanently.

At its core, Cerebral Palsy is a motor disorder that occurs in the womb or during infancy. It affects muscle control and tone, posture, balance, fine and gross motor skills, and oral motor functioning.

Signs and symptoms of Cerebral Palsy appear early during infancy. About 70% children with Cerebral Palsy get diagnosed within the first year as parents approach medical practitioners to get help for their baby. Remember also that the function of muscle groups can change over time, leading to changes in the symptoms associated with muscle coordination and body movement.

Cerebral Palsy is caused by damage or abnormal development of the cerebral cortex, the part of the brain that is responsible for directing muscle movement. Cerebral Palsy can be congenital (be caused during pregnancy or childbirth) or acquired.

Types of brain damage observed in persons with Cerebral Palsy are:[2]

What are the signs and symptoms of Cerebral Palsy?

The age at which a child can be diagnosed with Cerebral Palsy depends on many factors:

Children with Cerebral Palsy could have the following symptoms; however not all children who display these signs and symptoms have Cerebral Palsy:

Intellectual Disability could accompany Cerebral Palsy in some children. Children with Cerebral Palsy could have impaired ability to handle objects along with abnormal physical perception and seizures. They may also experience hearing or vision loss, as well as issues in communication. Persons with Cerebral Palsy may suffer from chronic and acute pain, experienced most commonly in joints such as knees and ankles, hips, upper and lower back.

Cerebral Palsy can be classified into 3 types based on the part(s) of the body affected, the type of movement affected and the severity of its effects:

Some people display symptoms that of more than one type of Cerebral Palsy. The most common type of mixed Cerebral Palsy is Spastic-Dyskinetic in which some muscles may be too tight, while others are too relaxed.

Why carry out an assessment of a person with Cerebral Palsy?

Early detection and intervention is extremely important. It helps to ensure that children with Cerebral Palsy function better and are successfully integrated into society. Early diagnosis means that developmental, educational, and vocational services as well as plans for treatment of congenital malformations and other medical conditions can be made in time.

An important reason to carry out an assessment of a child is to ‘grade’ the level of disability that s/he experiences. This has implications for whether the person will get a Disability Certificate.

What is a Disability Certificate?

Disability Certificate is a government certification of the nature and extent of the disability that a person has. It is the basic document that any Indian requires in order to avail government facilities, benefits, entitlements and concessions.

Persons with Cerebral Palsy are eligible to apply for a disability certificate if:

State/ District Government Hospitals have Medical Boards which are the certifying authority to issue a Disability Certificate. Click this link to the relevant information on Amrit’s website.

How is Cerebral Palsy diagnosed?

All aspects of the motor function of the child are looked into: both at rest and while walking. Although Cerebral Palsy is not a progressive disorder, there is physical impairments and functional mobility that change with growth. 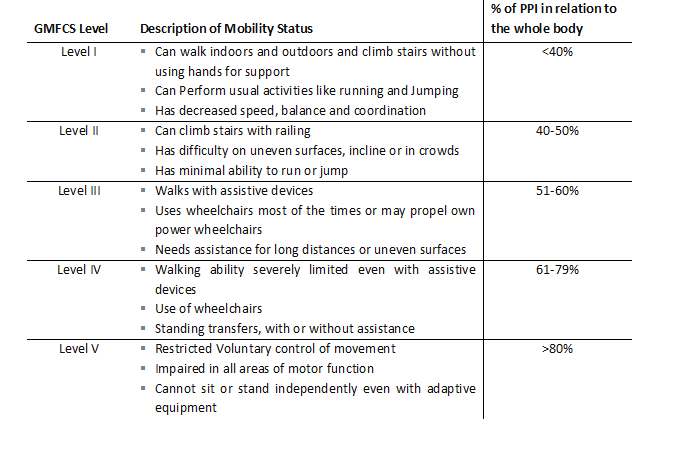 GMFCS looks at physical impairments of lower extremity and spine to arrive the impact of Cerebral Palsy on gross motor skills. They are assessed separately and a final disability is calculated using the combining formula: a+b(90-a)/90 where a=higher value and b=lower value. Total permanent impairment is calculated from 100%.