Disability is not just a health problem, rather it is a complex phenomenon that reflects the degree of ‘fit’ that a person can have in the society which she inhabits.

It is famously said that all of us will at some point of our lives experience disability. Disability varies according to a composite mix of factors, including age, sex, stage of life, exposure to environmental risks, socioeconomic status and culture. According to a WHO-World Bank Joint Report on Disability (2011), 15% of the world’s population has some kind of disability.1 The 2011 Census of India reports a figure of only 2.2%2, a figure that can be attributed to the training of the field data collectors, poor levels of knowledge and awareness of families, diagnoses of those affected, and the limited standards of health in most developing countries.

Disability itself is not a condition; it simply represents the challenges faced by persons who have levels of functioning at variance from most others in good health. For these reasons, this paper uses the term ‘challenges’ instead of ‘disability’ to denote that challenges could, with the right support, be conquered and overcome.

While there is substantial literature in the domain of physical challenges, very little is available about children with intellectual and developmental challenges (CwC). Intellectual and developmental challenges do not constitute any specific disease or illness; rather it refers to differences in cognition and the adaptive functioning of an individual. CwC require an array of specialised services that can train them for everyday functioning and support their social and economic empowerment.

Intellectual (and developmental) challenges are thus dynamic conditions that depend profoundly upon available environmental support.3

CwC and their families often incur additional costs to achieve a standard of living equivalent to that of others – this additional spending may go towards health care services, assistive devices, and costlier transportation.4 The indirect economic and non-economic costs of challenges can be substantial. Components of economic cost include loss of productivity from insufficient investment in educating CwC, exits from work or reduced work related to the onset of a challenge. Loss of productivity also results from insufficient accumulation of human capital, from a lack of employment, or from underemployment. Non-economic costs include social isolation and stress and are difficult to quantify.5 Losses increase when family members leave employment or reduce the number of hours worked to care for family members with challenges.

The Government of India has initiated a number of schemes and programs to help CwC mitigate their economic and social costs. Some schemes are designed to directly reach beneficiaries; others are routed through non-governmental organizations (NGOs). Benefits are offered both in cash, and in kind.

The National Handicapped Finance Development Corporation was set up in 1971 with the aim to provide financial assistance for capacity building and education of PwC to aid their socio-economic condition. The Corporation offers schemes to augment families’ financial resources to support income generating activities, skill training, education, and aids and appliances. These include loan schemes such as microfinance scheme, schemes implemented through state channelizing agencies (SCA) and nationalized banks, and Scheme for Parents Association on Mentally Retarded Persons, and non-loan schemes such as scholarship scheme, and Assistance to Disabled Persons for Purchasing/ Fitting of Aids and Appliances (ADIP) scheme.6

A sample of 100 caregivers of CwC were recruited from Service Provider locations from NGOs (73), special schools (18), skills development centres (6), government hospitals (2), and private clinics (1). Their children had one of the 4 conditions of Autism and Cerebral Palsy (32.0% each), Intellectual Disability (21.0%) and Down Syndrome (15.0%). Female-male ratios by challenge were as follows: Autism (9:23), Cerebral Palsy (8:24) Syndrome (3:12) and Intellectual Down (8:13). The sample had an overall greater representation of males (72).

Observation 1: There does not appear to be a male preference when it comes to caregivers seeking services for their child.

Figure 1: Service use among CwC by sex

Of the CwC that the respondents were caring for, 28 were females and 72 were male. About half of both girls (53.6%) and boys (48.6%) were utilising more than one service.

The services most used were special schools (56.5%) and skills development (35.3%). These appear to be a priority for caregivers of girls with challenges. Field notes suggest that caregivers prefer special schools mainly because they are apprehensive that the institutional infrastructure of mainstream schools is unable to create a comfortable learning environment for their child and accommodate the child’s needs.

Caregivers chose skills development services for their child because they wanted them to take on responsibilities and have a respected place in society, and be capable of ‘taking care of themselves’. As noted by one caregiver,

“Gurpreet is going for skill development classes so that she can learn a particular skill and can live independently in future. She goes for embroidery classes and recently, she has been awarded the best student in her class. Gurpreet is planning to open a shop near her home.”8

Recommendation: Much more work is required with mainstream schools to ensure that they are ‘disability-ready’. Caregivers are concerned about the future of their child after their own death and are willing to invest effort and resources to ensure their wellbeing. The government must incentivise the NGO and private sector to offer good quality, affordable special education and skills development to the poorest.

Observation 2: The financial burden of availing services for CwC is heaviest for those in the lowest income group.
Availing specialised services costs caregivers money beyond the usual household expenses. The money goes to the (i) cost of the service itself, as well as (ii) travel of both child and caregiver, as in all cases the child had to be accompanied during travel. 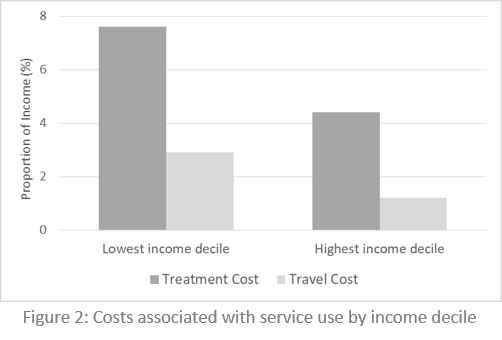 Caregivers in the lowest income decile, spent 7.6% of their income on services, possibly be due to the limited disposable income available to them. They spent another 2.9% of their income on travel to avail services, with the total proportion amounting to 10.5% of their annual income. In comparison, caregivers in the highest decile spent 4.4% of their income on services and additionally, 1.2% on travel. Thus their total expenditure on travel and treatment amounted to 5.6% of their annual income, much lower than for those in the lowest income decile. With health costs already accounting for a much higher proportion for them than for other deciles, this poses additional hardships.9

Field notes indicate that caregivers prefer to enrol their child in institutions in which they can get multiple services for the child – this helps to reduce transportation cost associated with service uptake. Yet, despite the high financial burden imposed by the services, respondents were generally unhappy with the care that their child was receiving.

Recommendation: The specialised services needed by children with challenges account for a substantial financial liability on families, especially among the poorest. Even partial reimbursement of cost and concessions on travel for caregiver and child would help to offset the overall burden that they carry.

Observation 3: The poorest place the highest value on education and skills.

Figure 3: Service use among CwC by income decile

Despite the several services that any CwC would require, just half of the caregivers (48) utilised more than one service. Caregivers in the lowest income decile face the double disadvantage of the burden of special needs and less disposable income. This shows up in the analysis with only 50% availing more than one service in comparison to the 70% in the highest decile – suggesting that one service was what perhaps, they could afford.

Recommendation: The full journey of a child’s education as envisaged by policy makers must include the option of skills development; this could be done by facilitating integration of formal education with specialised skills development academies, in order to ensure a smooth transition for children with challenges. It may be worthwhile to set up ‘life cycle’ centres which offer the full range of services for CwC.

Observation 4: Caregivers across income groups report that they have to take extra time off to care for their children.

In order to avail the specialised services that their child needs, more than half of caregivers reported that they had to request additional leave from their employers. On an average, caregivers took an additional 23.2% of leave for the treatment of their child each year. Those in the lowest quintile were hardest hit, requiring almost 40.0% additional leave.

This in turn, impacted the kind of work that caregivers could take up. Field notes record that some caregivers were forced to shift from full time work to setting up their own business or shops. While this work was often not very remunerative, it allowed them to spend much more time in taking care of their children.

“I run a teashop near my house and take Ravi for skills development classes. I do not earn very much, but at least I am able to spend a lot of time with my child. Even though I have completed my graduation and could find decent, well-paying work, I wanted to give my time to my child and his treatment.”

Recommendation: Workspaces must play their part and allow a degree of flexibility to accommodate the needs of caregivers. A small step in this direction could be flexible working hours, work-from-home facility, or an insurance cover for working caregivers. Those with children with challenges, especially the poor, could be offered additional leave entitlement. 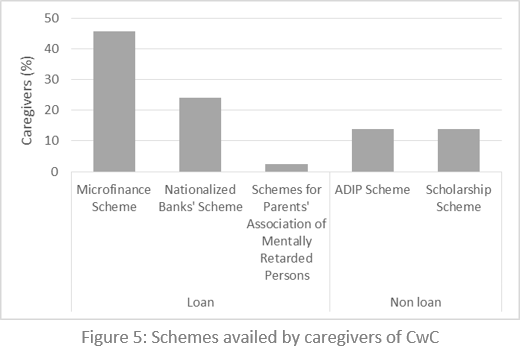 An analysis of schemes availed by caregivers was showed that they availed schemes under both categories: loans (72.1%) and non-loans (27.9%). Caregivers utilised loans available from the microfinance scheme, schemes implemented through SCA & nationalized banks, and Scheme for Parents Association for Mentally Retarded Persons. Scholarships were availed through the Scholarship Scheme, and aids/ appliances under the ADIP Scheme. Observations show that the microfinancing scheme had the highest uptake (45.6%); followed by schemes implemented through SCA and nationalized banks (24.1%), and the scholarship scheme and ADIP (13.9% each). The Scheme for Parents Association for the Mentally Retarded Persons had the least uptake (2.5%).

In the ultimate analysis, parents utilised the schemes to get some assurance that their child was given a modicum of respect and could look after her/himself.

“I opted for the Micro Financing Scheme under which I could get a loan to provide for Neeraj’s studies. I want him to study in a mainstream school so that he gets an equal opportunity as his peers. I have always wanted Neeraj to be judged as being no less than other children.” 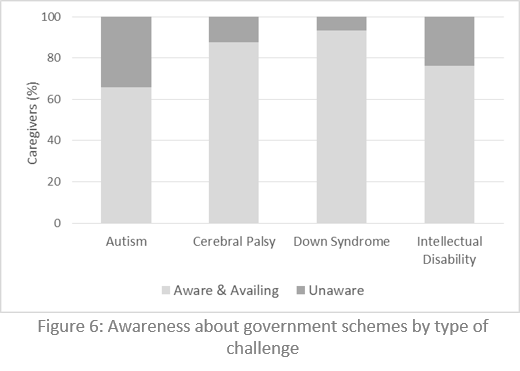 Recommendation: Wider dissemination about government schemes is urgently required so that more caregivers become aware of and avail the schemes. Greater efforts should be made to get this information in a simplified form to institutions concerned with persons with challenges, so that it forms an essential part of the package offered to them by the institution.

Observation 6: The funds received by caregivers are valued by them, but are woefully inadequate. 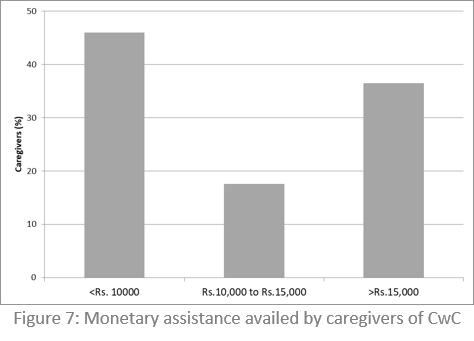 Caregivers noted that the financial aid provided by the government serves as bare bones support, and is not nearly enough to cover the range of expenses that they incur on their child’s treatment.

There did not appear to be much difference in the uptake of these schemes by decile, although it was noted that those in the lowest decile availed a lower volume of loans. Caregivers in the lower income group in particular, were discouraged by the interest that had to be paid on loan amounts of high value. Present rates of repayment are quite steep, especially for caregivers already struggling with the high cost of services.

Recommendation: Reduction in the interest rates of the loans may be worth considering for persons with challenges in the lowest decile/ quintile. This is being offered presently for women with disability.

A closed-ended survey was conducted with caregivers with CwC under 18 years of age. The questionnaire was translated into Hindi for ease of non-English speaking respondents. Informed consent was taken in writing before each interview was conducted. Data was transferred to Microsoft Excel (year 2007) for cleaning and analysis. Respondent names and locations were replaced with index numbers to ensure confidentiality of the responses collected.

Since the issues probed were sensitive, the study faced the following limitations: